But major projects like HS2, the London super sewer and Hinkley Point are expected drive the industry along after that at a booming 4% average annual growth level in the medium term.

Forecasters at the Construction Products Association have dismissed fears of gathering global headwinds with an upbeat and steady growth forecast through to 2019. 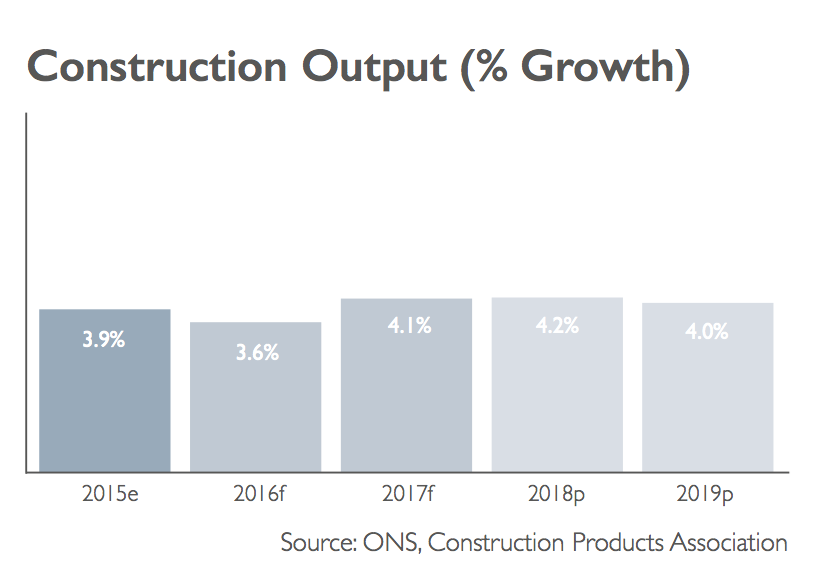 Professor Noble Francis, economics director, said:  “The key fundamentals for the sector are generally positive and construction growth is set to be more balanced.

“Private housing work, especially in London and the South East, provided the majority of growth between 2012 and 2015.  During this forecast period, however, all three of the largest construction sectors – private housing, commercial and infrastructure – are expected to drive industry activity.

“The infrastructure sector is set to stand out, rising 56.9% by 2019 owing to substantial activity in the rail, energy, roads, water and sewerage sub-sectors.

The giant HS2 project, which was excluded from previous forecasts due to uncertainty regarding its cost, planning and timing, is now being included.

“The energy sub-sector will be boosted by work on Hinkley Point C where main works are anticipated from 2018, though further delays cannot be ruled out,” he said.

“Roads construction is also likely to increase throughout the forecast period, by 37.2%, but this is substantially less than was initially expected as Highways England struggles to enact its project pipeline to time and budget.”

Francis said that the commercial sector was forecast to improve 3.7% on average per year through to 2019.

This would be driven by a flurry of new offices construction in London, Birmingham and Manchester delivering, 7% growth this year and next. Retail construction, on the other hand, was expected to remain flat this year with a modest 2% in 2017.

Private housing starts were also forecast to rise 5% in both 2016 and 2017, buoyed by a high latent demand for home ownership, while  public housing starts fall 5% in 2016.

Francis warned: “There are significant risks to this forecast. “The chief concern remains weakness in China and the effect it can have on other countries.  Second is the EU Referendum, likely due this year.  While we make no assumption about the result, we note the uncertainty around the issue is already affecting investment decisions.

“Third and perhaps of most importance for the industry is the urgent challenge around skills shortages.  The availability and cost of skilled labour has clearly impacted the house building sector; the recovery in other sectors is already showing a similar vulnerability.”