Costain workers are rebuilding the Dover to Folkestone railway at Shakespeare beach but have had large rocks hurled at them over two nights from the cliffs.

Network Rail has had to ramp up security along the cliff tops and police are appealing for information after workers were nearly hit by the missiles.

Dover and Deal MP Charlie Elphicke said: “The rocks missed site workers by inches and if they hit anyone, they could have been killed or at the very least have been seriously injured.”

Network Rail’s programme manager Steve Kilby said: “The consequences of a serious injury or fatality as a result of someone being hit by one of these stones would be enormous. We are taking action to put our own 24/7 security and lighting at the top of the cliff.”

“I appeal to anyone who may know who these yobs are to come forward and to parents to talk to their children about the dangers of this kind of behaviour.

“All this has distracted from the incredible progress made by Network Rail and their partners Costain in building the first section of the viaduct here at the Dover sea wall.

“I’ve been massively impressed by the hard work and dedication of the team, who worked tirelessly to rebuild our railway and we need to support them in any way we can and do our bit to help keep them safe.”

The railway along the beach at Dover has been closed since Christmas 2015 because of storm damage. Network Rail is building a 235m long viaduct that will sit on 134 piles,  of which more than 100 have been completed so far.

The incident over the weekend on Friday and Monday marred a major milestone on the project, which was three-months in the planning. 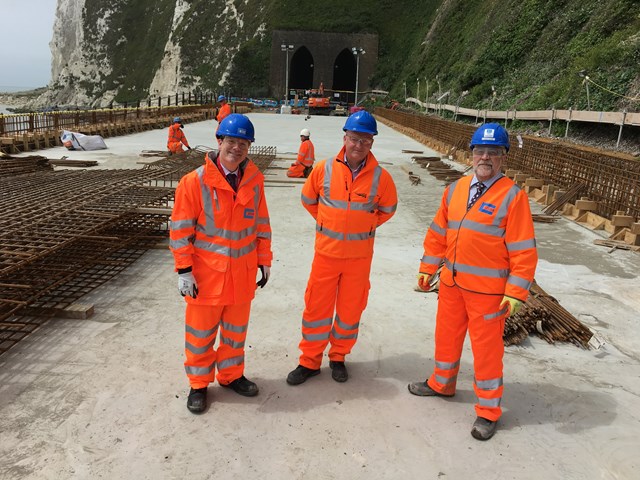 More than 500 cubic metres of concrete was poured into place over the weekend, in a 15 hour continuous operation involving a fleet of 13 concrete vehicles from Kent supplier Brett concrete, using their plants at Dover and Ramsgate.

Kilby said: “This was a serious feat of organisation and we knew that once we started to pour the concrete, we couldn’t stop until the whole pour was completed. That way we knew the deck would be one consistent slab with no joins.

“I’d like to pay tribute to our contractor Costain and concrete supplier Brett Concrete for their work this weekend. We’ve now got to do it three more times before the viaduct structure is complete”

The concrete pouring started at 8pm on Saturday and finished soon after 11am on Sunday.