The ground-breaking design by Zaha Hadid Architects was chosen following a seven month competition which attracted more than 50 entries from around the world.

The stadium will be the centrepiece of a £100m EcoPark development by green energy specialist Ecotricity across 100 acres beside junction 13 of the M5 in Gloucestershire.

“The really standout thing about this stadium is that it’s going to be almost entirely made of wood – the first time that will have been done anywhere in the world.

“The importance of using wood is not only that it’s a naturally occurring material, it has very low carbon content – about as low as it gets for a building material.

“It’s why our new stadium will have the lowest carbon content of any stadium in the world.” 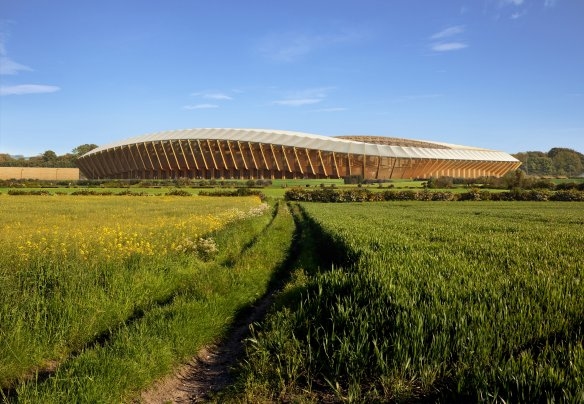 Jim Heverin, Director at ZHA, said: “With the team’s community and supporters at its core, fans will be as close as five meters from the pitch and every seat has been calculated to provide unrestricted sight lines to the entire field of play.

“Forest GreenRovers’ new stadium and Eco Park aims to be carbon neutral or carbon negative,including measures such as the provision of on-site renewable energy generation.

“The buildings on the site, and their embodied energy, play a substantial role in achieving this ambitious target and demonstrate sustainable architecture can be dynamic and beautiful.”

The runner-up entry came from Glen Howells Architects, the firm who designed the award-winning Gloucester Services on the M5.

Half of Eco Park will consist of state-of-the-art sporting facilities, including the new stadium, grass and all-weather training pitches, publicly accessible multi-disciplinary facilities, and a sports science hub.

The other half will comprise a green technology business park with sustainably built commercial offices and light industrial units, giving Eco Park the potential to create up to 4,000 jobs.

The proposal will also see the development of a nature reserve on the site, a potential public transport hub, including a Stroud Park and Ride, as well as help with the restoration of the Stroudwater canal.

Demolition framework for Scottish council and housing associations
4 hours ago

Post lockdown recovery continues as £9.3m of furlough cash to be handed back to government
12 hours ago

Demolition worker fights for her life after site accident

Shannon Brasier, 20, in coma at Royal London Hospital
5 days ago

McAlpine to cut 6% of staff after strategy review