The Old Bailey heard that on 21 January 2011 the men were constructing a large steel structure as part of the foundation for a large Pressure Test Facility (PTF) at Claxton Engineering Services in Great Yarmouth.

The structure – which weighed several tonnes – collapsed on top of the group.

A large-scale emergency response took place to try and rescue the trapped workers. Adam Taylor, 28, 41-year-old Peter Johnson and brothers Thomas Hazelton, 26 and Daniel Hazelton, 30, were all pronounced dead at the scene.

The excavation for the horizontal PTF was more than 23m long, 3m wide and 2m deep. The horizontal steel cage being constructed would have weighed about 32 tonnes when completed.

The group were working for Hazegood Construction Ltd. Daniel Hazelton was an employee, while the other three were self-employed contractors.

Encompass Project Management Ltd was the principal contractor, with Hazegood operating as a contractor. 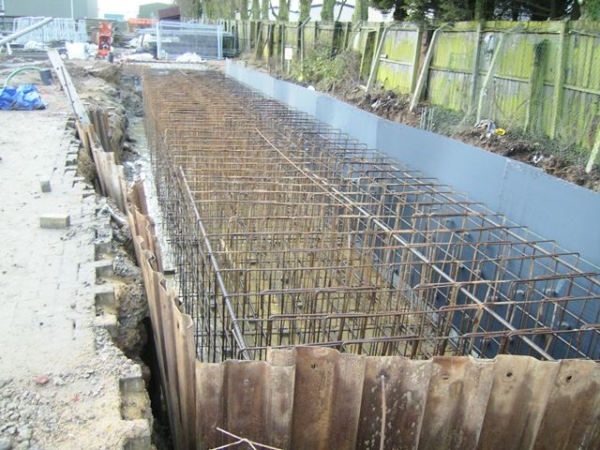 The same structure before the incident

An HSE investigation found serious flaws in the planning, management and monitoring of this complex project on the part of Claxton as well as Encompass and its company director David Groucott.

Claxton Engineering Services Ltd of Norwich pleaded guilty to safety breaches and was fined £500,000 and ordered to pay costs of £100,000.

Encompass Project Management Ltd of Thetford, Norfolk pleaded guilty to safety breaches and was fined £200,000 and ordered to pay costs of £50,000.

Groucott of Diss, Norfolk also pleaded guilty to safety breaches and was sentenced to a seven and a half month custodial sentence, suspended for two years.

He was ordered to complete 200 hours of unpaid community work within 12 months, and also ordered to pay costs of £7,500.

Charges against Hazegood Construction Ltd were ordered to lie on file.

HSE Construction Division Head of Operations Annette Hall said: “Those sentenced today failed the four workers who died. They didn’t carry out their legal duties, leading to the events which caused their deaths.

“This was a long term, large scale and complex civil engineering project which needed to be planned, designed, managed and monitored effectively.

“The tragedy here is that, in the months leading up to the accident, any one of these parties could and should have asked basic questions about building the structure safely. Such an intervention could have avoided the tragic outcome of this entirely preventable accident.”

Housing giants and councils among biggest beneficiaries
5 hours ago

Alliance of social landlords in the North aims to build 10,000 offsite homes per year.
5 hours ago

Construction could start in 2023 on 1,610 new homes on riverfront site
2 days ago

Construction of a 1,300 space multi-storey car park to clear way for large-scale development
6 days ago