New figures for May showed all work output slipped by 1.2% month-on-month, driven mainly by a 4% fall in infrastructure, equating to a real value fall of £61m.

Other notable downward pressure on construction output came from private commercial work (down 1.6%), and non-housing repair and maintenance.  The only sector to show growth was social housing, up £6% or £21m in cash terms. 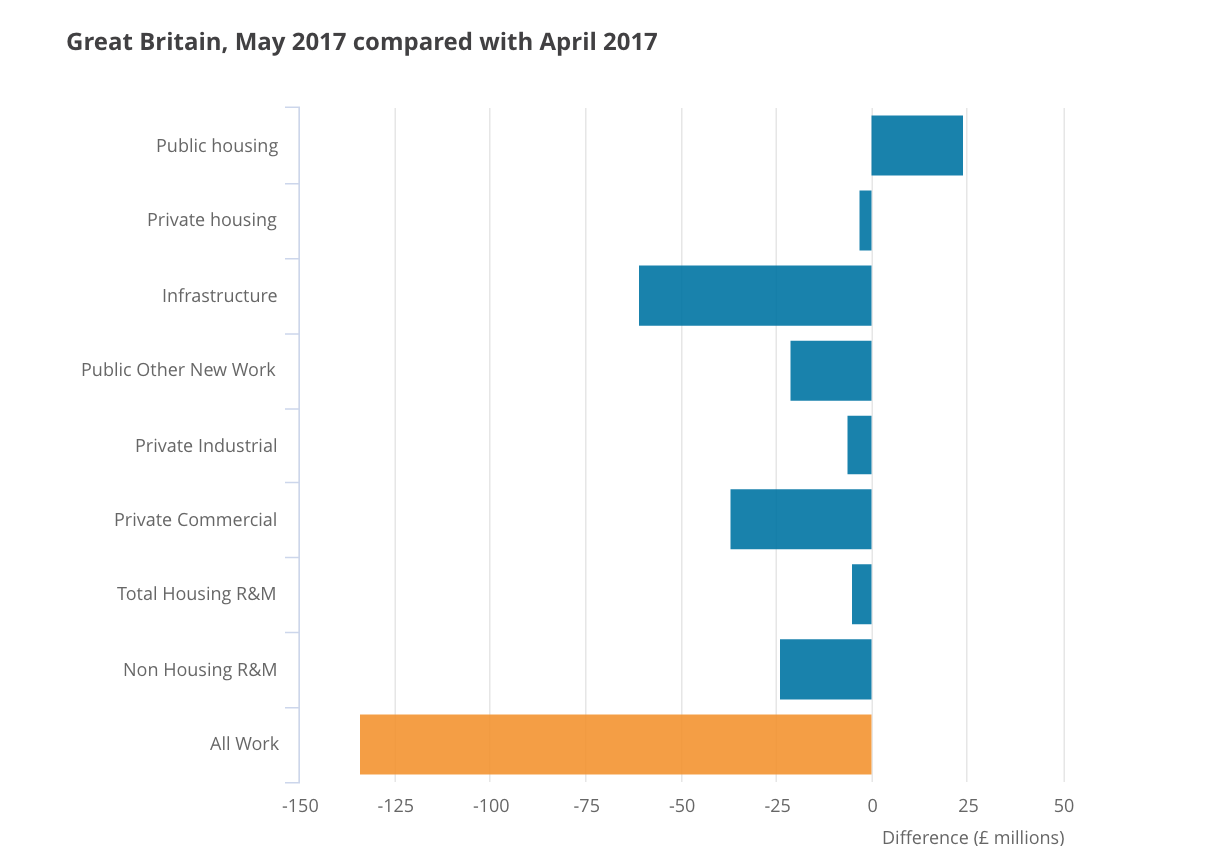 TheOffice of National Statistics three-month trend figures also slipped back 1.2%, which represented the sharpest fall for five years, albeit after a sustained period of growth.

This fall was driven mainly by infrastructure and private new housing, which dropped 1.3% and 1.8% respectively.

‘The run-up to the General Election saw the largest three-month drop in construction activity in five years, and most worrying was the lack of new work in the infrastructure sector.

He said: “The reality of a vulnerable minority government is that the uncertainty around big projects could continue for some time.

“The Government and MPs of all parties should nevertheless see infrastructure delivery as a top priority, as it is essential to maintaining economic growth and supporting local supply chains. The latest announcement on new bypasses is therefore extremely positive and the government should push ahead on this and other schemes.

“We must not let up on the most ambitious ‘once-in-a-generation’ infrastructure projects either – our latest research shows that if the Government were to consider reforming the UK’s procurement rules it could mean local supply chains would benefit from up to £11.2 billion over the lifetime of the HS2 project through public contracts.”

Michael Thirkettle, chief executive of property consultancy McBains Cooper, said: “The new government needs to ensure that housebuilding is at the top of its agenda, so at least there were encouraging signs this week with the proposals from Communities Secretary Sajid Javid for local authorities of wealthier areas to have their house building targets reviewed to help alleviate the housing shortage.

“But there is still much to be done elsewhere in the industry if we are to succeed, including streamlining existing planning laws,  greater investment in public projects, and ensuring that the industry has enough skilled labour to meet housebuilding targets – which won’t happen if the government clamps down on the use of skilled migrant workers from abroad.”