Problems have been identified in sections of the concrete base slabs constructed above the galleries sections of tunnels which will contain site infrastructure.

The Enquirer understands that the problem concrete is local to a small stretch of the 8km network of galleries tunneling.

Nothing has been built on the slab and it does not form part of the foundations for the main nuclear power plant building where work is not due to get underway for 18 months.

A joint venture of Kier and Bam Nuttall is main contractor on the site earthworks package. 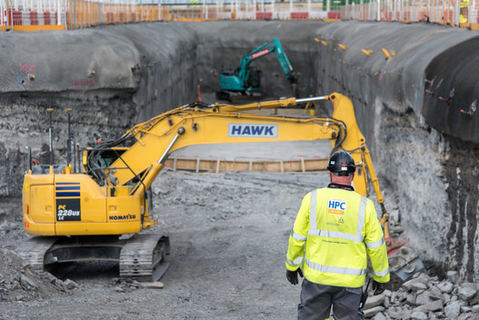 Hinkley delivery director Nigel Cann said: “We have decided to replace a small area of concrete poured as part of the work to create tunnels for the pipes and cables.

“This is in line with the uncompromising attitude to quality taken at the Hinkley Point C Project.

“It is a very small proportion of the concrete poured on site so far and has no impact on the project schedule.”

• 1,500 bed “Campus” accommodation for workers under construction with 500 beds on the site and 1,000 in Bridgwater – supplied by Newark-based Caledonian Modular .

• 76 apprentices are already working on the project, which will create up to 1,000 apprenticeships during the build.

• 10,000 tonnes of rock has already been delivered by ship from Pembroke, for the site’s new 13.5 metres high seawall.

• 29km of ground nails have been installed – enough to loop the perimeter of Hyde Park six times. The steel rods, each measuring up to 12 metres long, are used to stabilise the ground. A total of 110km will be used during construction.

• Project remains on track to meet the 64% UK supply contribution with nearly £9bn of contracts signed since final approval. The latest contract with ABB Group was signed last month for the main power transmission systems for both reactors.

• 49 piles have been installed for the 500m temporary jetty in the Bristol Channel. Each pile – the foundation legs for the jetty – is 36 metres long, 3.6 metres in diameter and weighs in at 140 tonnes. The jetty will allow 80% of the aggregate to be brought in by sea rather than by road and is due to be completed next year. Devon engineering firm Blackhill worked on its largest-ever project involving 550 tonnes of steel for the jetty.

• Dozens of cranes of all sizes are already on site alongside 200 pieces of large-scale construction equipment, ranging from excavators capable of moving 30 tonnes of earth in a single scoop to giant dumper trucks. The tallest ‘tower’ crane is 40 metres tall and can lift 16 tonnes. At peak construction there will be 50 ‘tower’ cranes at site.

• £15 million is being invested into education, employment and skills to help inspire the next generation and provide people with the necessary training and support to help them into long term careers. Multi-million pound investments into a Construction Skills Centre and an Energy Skills Centre are not only ensuring that local people are equipped with the skills they need for the future, but helping to fill a national skills gap.

Development joint venture will see at least 2,800 homes built across the county
11 hours ago