New figures from the London Office Crane Survey by Deloitte Real Estate show just 25 projects were started between April and September this year.

This figure is around half that recorded during last year’s peak of 51 and equates to just 1.8m sq ft being added to the development pipeline, which is 21% below the average for six months.

The fall has been concentrated in the City, while the West End has actually witnessed a significant up-tick in start-up activity.

Shaun Dawson, head of insight at Deloitte Real Estate, said: “We have seen slowdown in development activity with two crane surveys recording a fall, but total volumes still remain high compared to our long-term average, continuing to stay above 10m sq ft since 2015.

“It is this reduced volume of new space starting that could indicate a slowdown and suggests a cautionary approach by developers over the past year.”

Early trades such as demolition and substructure contractors are showing on average no growth and a small drop in workload expectation respectively, also suggesting the industry is moving into a slower gear.

Deloitte presently anticipates that price increases for Greater London will stabilise in 2018 to around 1‑2%.
Against general consensus of subdued specialist price inflation, brickwork and roofing contractors anticipate average increases of 10% and 7% respectively, driven by a spurt in residential developments rather than office projects.

Overall construction activity in the capital has dropped 9% to 12.6m sq ft since the previous survey six months ago. This is also down to a wave of projects now coming to completion as 2017 shapes up to see the highest volume of office space opened for 13 years.

Around half of the pipeline under construction is already pre-let.

In the City development activity is down 11% with 7.3m sq ft under construction. Only eight new schemes started during the period. This represents 804,000 sq ft, significantly lower than the 1.1m sq ft average.

In the West End 14 new schemes totalling 657,500 sq ft started construction, the greatest number of new starts recorded in a single crane survey for this submarket.

Alongside existing activity, there is now 1.4m sq ft being built across the West End – a 20% increase since the last survey.

Refurbishment schemes continue to dominate the new starts with 16 offices accounting for 70% of the volume.  Generally smaller in scale than new-builds, the average size of project has dropped from its long-term average of around 97,000 sq ft to 73,000 sq ft. 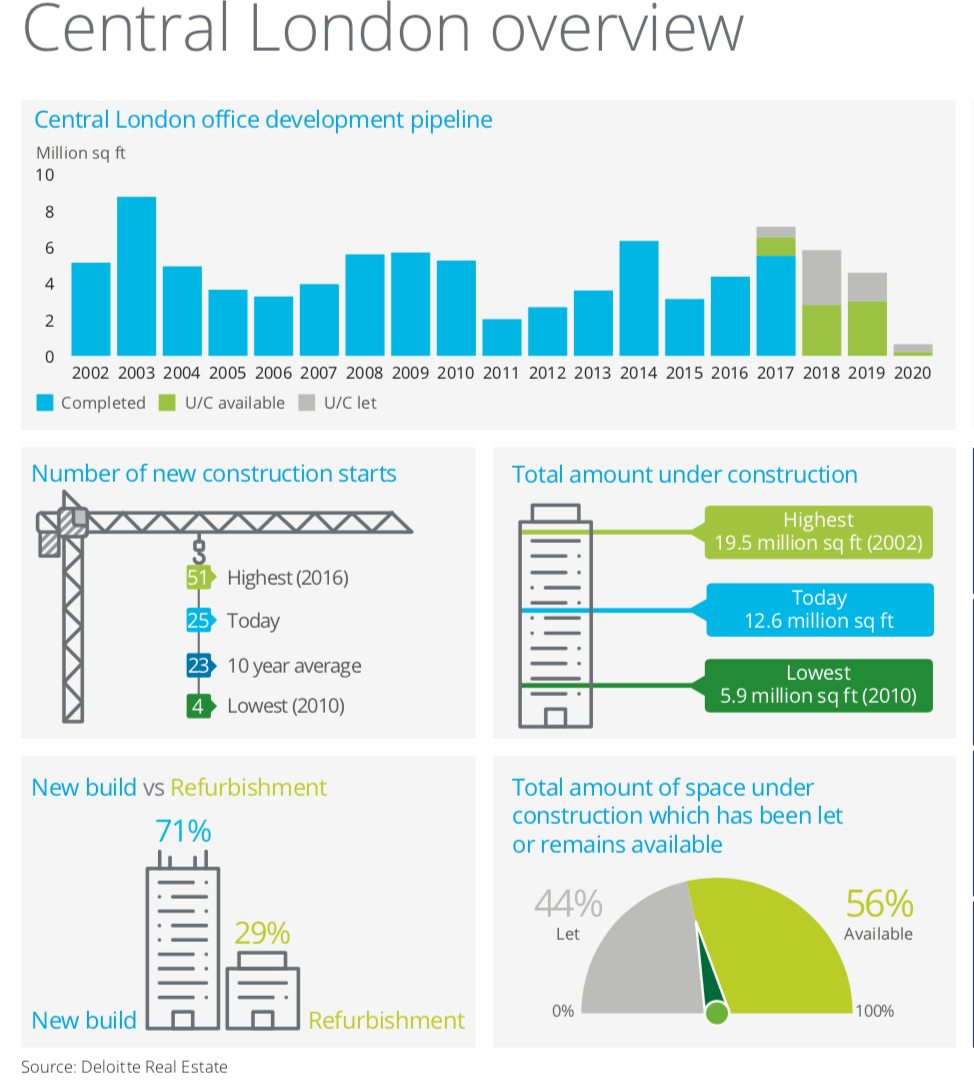