The victim was passing a Higgins Homes site in east London on Tuesday morning when the crane dropped a pallet of bricks.

Police in Tower Hamlets are appealing for witnesses after launching an investigation with the Health and Safety Executive.

A police statement said: “Officers were called at 09:38hrs on Tuesday, 27 March to Burdett Road at the junction with St Pauls Way, E3.

“A 28-year-old woman had apparently been struck by debris falling from a building site crane.

“The London Ambulance Service attended and the woman was taken to an east London hospital, where she remains in a critical condition.”

Steve Boreham, construction director of Higgins Homes said: “Our primary thoughts and concerns are with the lady who has been injured and those affected today. 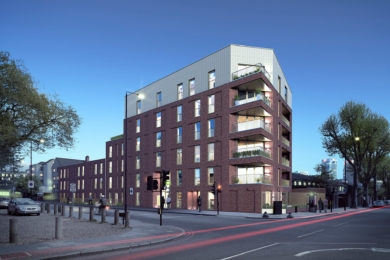 How the apartments will eventually look

“We are working with the Health and Safety Executive who are investigating the incident to determine the cause and will release more information as soon as it is available.”

Burdett Road. Looks like bricks that somehow broke loose from the crane pic.twitter.com/6k8T9zIpfV

Contractor fined £80,000 after employee fell through fragile roof
1 day ago

Average weekly pay tops £1,000 in London, the South East and East of England.
4 days ago

1,000 site visits planned in coming months to check how workers are moving heavy or bulky materials
7 days ago