The £100m Ashton Gate extension would be a 4,000-capacity venue and provide a permanent home for Bristol Flyers basketball team.

Also the proposal includes additional housing, offices and a multi-storey car park along with two hotels. 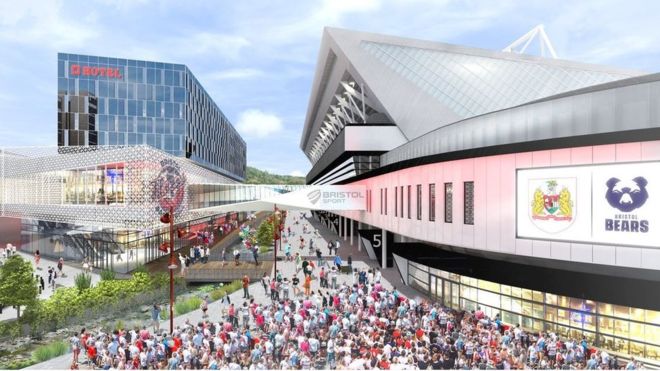 Chairman Martin Griffiths said: “It has been more than two years in the planning to ensure that Phase II of Ashton Gate’s redevelopment into a city quarter focused on sport and entertainment was indeed viable, sustainable and most importantly achievable.

“Following the successful £45m transformation of Ashton Gate Stadium, on-time and on-budget, it was always the aspiration to develop it further to give our basketball team, the Flyers, a permanent and secure playing home, right here in BS3.

“The new sports and convention centre will also provide much-needed space for the growth of a broad range of community-based sports, run by our group of charities based at Ashton Gate. ”

Earlier this month, the city’s mayor Marvin Rees scrapped an unrelated plan to build an entertainment arena in the city centre in favour of a mixed-use development.

At around 4,000 the new sports arena is unlikely to impact on the search for a home for a larger 12,000-seater arena for the city.

Government promises "biggest change in building safety for a generation."
12 hours ago

Oakervee review to give "lukewarm" backing to project
21 hours ago