Growth for next year has been downgraded to rise by only 0.6% with this year now expected to be flat amid Brexit uncertainty and on-going delays in the delivery of major infrastructure projects.

The Construction Products Association’s Autumn Forecast predicts that even this growth will depend on the Government extending help to buy and driving ahead with major infrastructure projects to hit the expected output peak of £23bn by 2020. 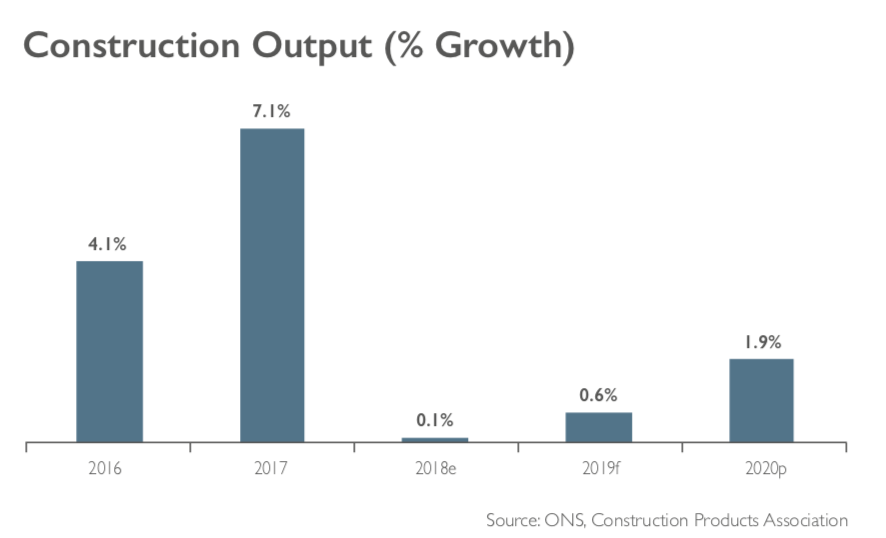 Over the last 12 months, the equity loan accounted for almost one-third of all house building sales, particularly sustaining demand  in the North and Midlands which has offset falls in London and the South East.

The housing sector’s output is forecast to rise 5% in 2018 and 2% in 2019 – but this assumes government will extend funding for the scheme beyond 2021. Without an extension, housing starts are expected to start declining from 2019.

Infrastructure, the other primary driver of growth, is forecast to achieve a historic high of £23bn by 2020, driven by large projects such as HS2 and Hinkley Point C.

But forecasters remain concerned about government’s ability to deliver major infrastructure projects without the cost overruns and delays seen recently on Crossrail.

Caution surrounds the forecast, and growth in the infrastructure sector has been revised down to 8.7% in 2019, from its previous forecast of 13%.

Brexit uncertainty continues to drive expectations for the sharpest construction decline in the commercial sector, particularly felt in the offices sub-sector.

Investors have signalled the uncertainty is too high to justify significant up-front investment in new floor space for a long-term rate of return, and output is expected to fall 10% in 2018 and a further 20% in 2019.

Noble Francis, Economics Director at the Construction Products Association said: “Construction continues apace in some sectors such as house building, particularly in key hotspots of activity such as Manchester and Salford. Overall, we are still expecting construction output to increase next year but this growth is highly dependent on house building outside London and also major infrastructure projects offsetting falls in activity in other sectors.

“The forecasts assume that the UK and EU will agree a deal on Brexit towards the end of the year but the continued uncertainty over a ‘No Deal’ Brexit has already had a big impact on construction new orders in construction sectors dependent on high upfront, often international, investment for a long-term rate of return.

“These include the construction of prime residential in London, industrial factories and commercial offices towers.

“Even if the UK government eventually agrees a deal with the EU on Brexit, construction output in all these sectors is expected to fall sharply during 2019 due to falls in new orders, which have already occurred in the past 18 months, feeding through to activity on the ground.

“Major infrastructure projects are expected to drive industry growth in 2019 and 2020 but the £600m cost overruns and nine-month delays to Crossrail add to existing concerns about government’s ability to deliver major projects and lead to additional concerns about the delivery of already delayed projects such as Hinkley Point C and HS2.”

Billingsgate, Spitalfields and Smithfield to get a new home in Dagenham
5 hours ago

Driver unveils changes at the top

Work to start this summer on National Manufacturing Institute Scotland.
1 day ago