Search warrants were executed on Thursday at a number of addresses across the UK in conjunction with Merseyside Police as part of a joint investigation with North-West Regional Organised Crime Unit.

The three developments being investigated are:

The Enquirer has reported extensively on the problem projects as they suffered failing contractors, developers and complaints from Far East investors who had paid millions up-front for flats.

The SFO said it “cannot comment any further at this stage.”

Officers are asking members of the public who have invested in any of the three property developments to complete a questionnaire here. 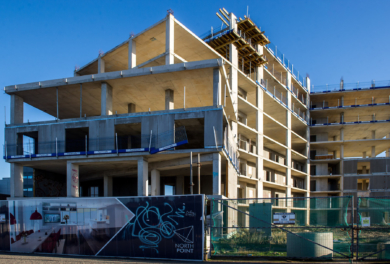 Developer Elliot Group has begun demolition of the part-built residential scheme on Pall Mall in Liverpool that it bought from the receivers of North Point Global in November.

Liverpool-based Mees Demolition has moved on site to begin a twelve week programme which will see the eight floor concrete frame flattened and the removal of several thousand tonnes of concrete.

Elliot Lawless of Elliot Group said: “We promised we’d get cracking as soon as possible and it’s great to see so many lads on site.”

Work is progressing with architects Falconer Chester Hall on a new plan for a comprehensive mixed-use scheme which Lawless hopes to present to council officers for review in around six weeks’ time.

The original scheme had planning permission for 366 homes but Lawless said that his ambition is to develop a mixed-use scheme which balances employment uses with residential.

He added: “This is on the northern boundary of the business district and would make a natural extension for it so we’re examining the feasibility of office uses alongside hotel, leisure and residential provision and will seek the council’s views shortly.

“Whatever we collectively agree, it will be better than what came before and will create more jobs and infrastructure for the city.”