Manchester’s construction boom is not only pushing the skyline to new heights but now outstrips construction project numbers in Los Angeles and Chicago, according to the latest Deloitte Crane Survey.

Simon Bedford, partner and regional head at Deloitte Real Estate, said: “If Manchester had featured in the recently published North American Crane Index, it would have ranked number two – behind Toronto but in front of Seattle, Los Angeles and Chicago.

“That might have seemed like a remarkable stat a few years ago given Manchester only had one crane in the sky in 2011, but today the figure is a massive 78 sites under construction.”

Despite Brexit woes dampening activity in commercial and residential in London, Britain’s biggest regional cities still boast a strong pipeline of projects for the next few years.

Birmingham and Leeds are beginning to accelerate with their own crop of inner city schemes.

Bedford added: “The marked increase in office construction levels is reflective of the continued draw to all these regional cities for major businesses. Investor confidence is thriving, as the rise in office pre-let deals clearly demonstrates.

“To have construction figures this healthy is somewhat of a surprise given a myriad of market uncertainties,” he said.

“Developer confidence is a key indicator for economic health and to have this many significant construction starts over the last 12 months, especially in speculative office schemes, is testament to the resilience of the regions and appetite for growth.”

Looking ahead, Bedford said: “Despite record levels now, challenges may arise as we enter the 2020s.

“Each of our featured cities have ambitious plans which, if they are to emerge, will need to be supported by investment in essential infrastructure which is currently struggling to keep up with the pace of real estate development. The next decade may well be all about transport and smarter city solutions.”

The residential sector is driving the record levels of development activity. A total of 14,480 residential units are under construction – double that of two years ago.

Last year, 2,569 units were delivered to market – the highest level in 12 years and Manchester’s development pipeline suggests 2020 as delivering the most homes in nearly 20 years. 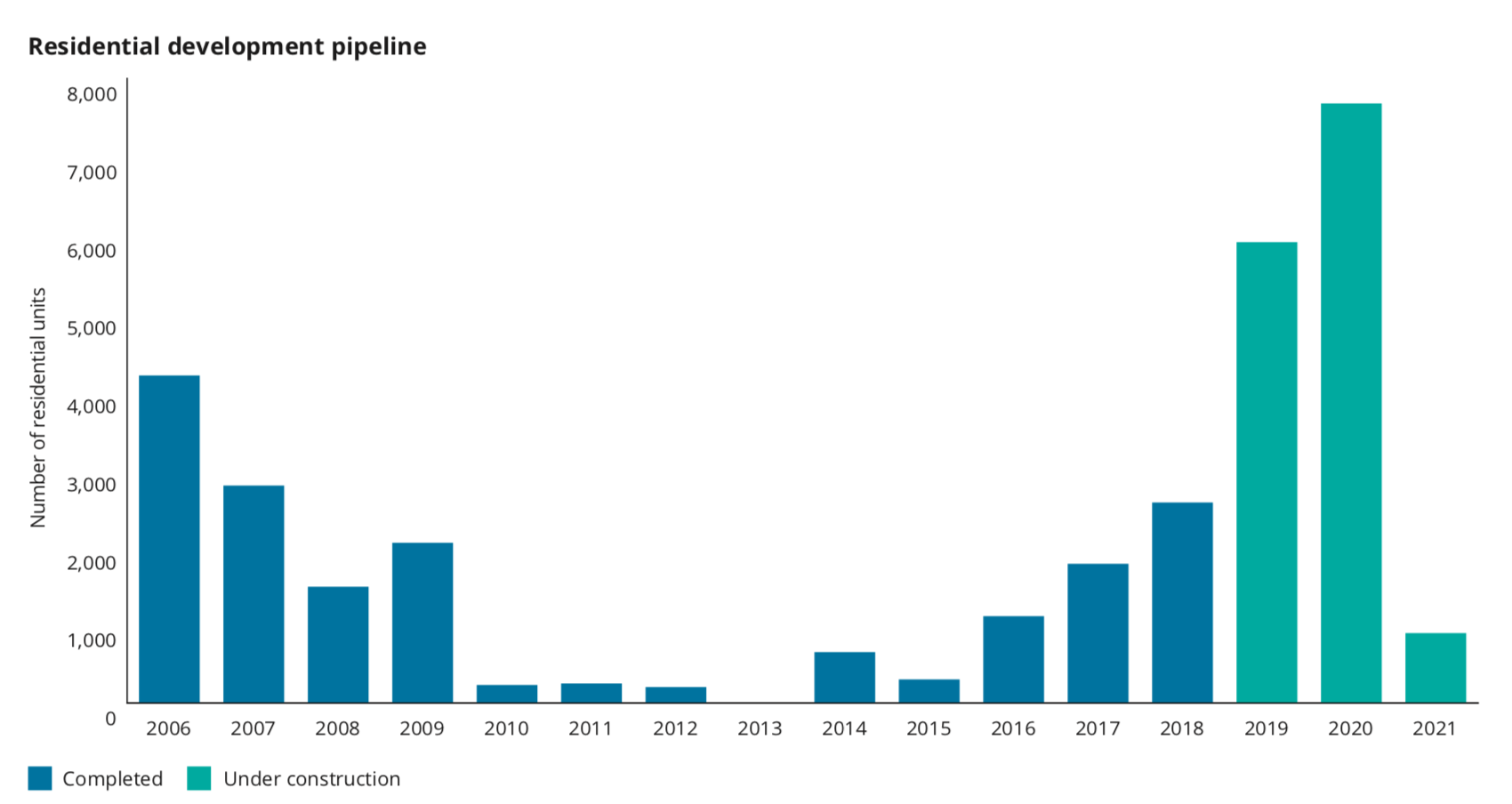 Manchester’s office sector has over two million sq ft of office space under construction across 13 schemes; a remarkable increase on the consistent levels of 1.5 million sq ft reported between 2015 and 2017.

North West occupiers have been busy as a quarter of office developments in 2018 were pre-let.

Last year also saw the delivery of the most residential units to the city centre, the highest since the Birmingham crane surveys started in 2002. 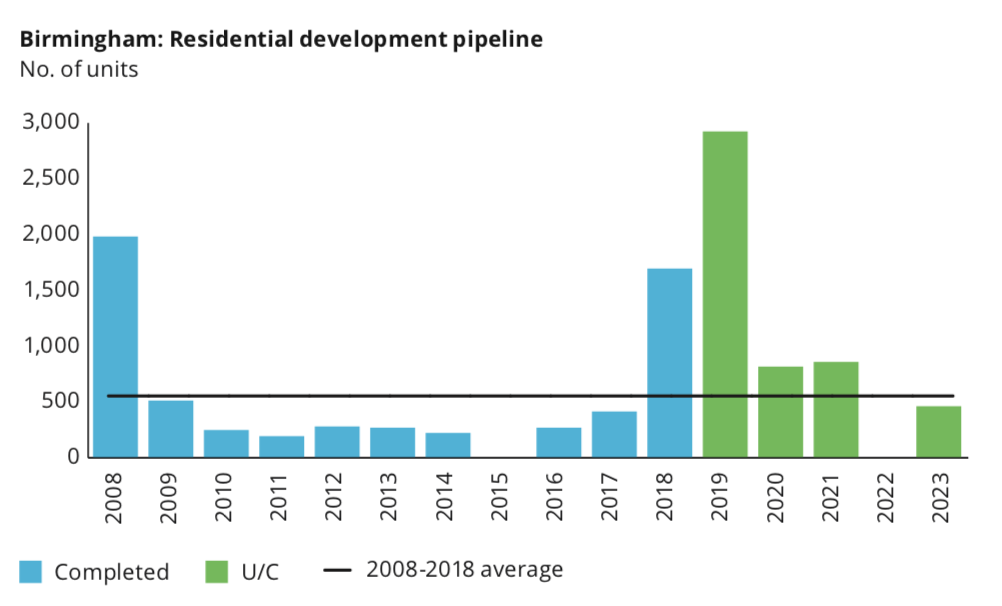 New office development is down from a peak of seven new starts in 2016, to just two new schemes today.

But the total office volume under construction remains high at 1.4 million sq ft and 2019 is set to be a record-breaking year for office completions.

Leeds has recorded the highest level of construction in the city centre since the Leeds crane survey began in 2002, with 21 new construction starts in 2018.

Residential development continued an upward trajectory with three new starts, set to deliver a further 533 units to the city, bringing the total to 2,119 units currently under construction. 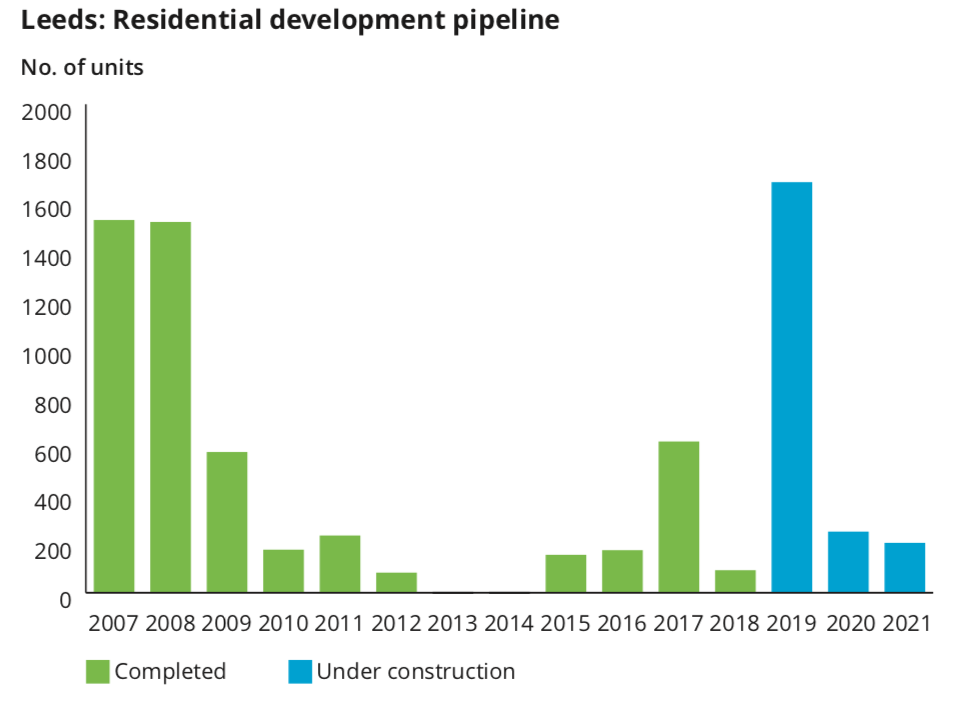 Five of the developments under construction are ‘build-to-rent’, which will be the city’s first purpose-built private rental homes.