In a report setting out the challenges faced by main contractors in the delivery of major infrastructure projects, it warns that the UK’s ‘will they, won’t they’ approach to major project planning and funding is hitting the skills pool.

There is now a real fear that staff taken on to deliver huge contract packages could be put at risk.

“Balfour Beatty has taken on a large number of employees in order to enable us to deliver the contracts we are proud to have won on HS2,” said the contractor.

“However, the delays to HS2 mean that these people will now either have to be redeployed where possible, onto other schemes, or, where this is not possible, be made redundant.

“This situation is being replicated across the industry.”

The project is reported to be around £1bn over the £6.6bn budget and HS2 bosses want contractors to streamline final costs before signing off contracts for the construction phase.

Main civils on HS2 was originally planned to start in in November 2018. This slipped to March before being extended to June in order to provide suppliers with additional time to optimise their designs.

Now HS2 chiefs have put this date back again to after the summer to give contractors more time on delivering costings in line with expectations.

“Unscheduled delays such as that currently impacting HS2 will effect current agreements to phase work on concurrent mega projects,” says the Balfour report

“Mega projects should therefore be planned and sequenced by Government as a programme or pipeline of work to avoid ‘feast and famine’ in the supply of skilled labour,” it warns.

Next decade of mega projects and workforce demand 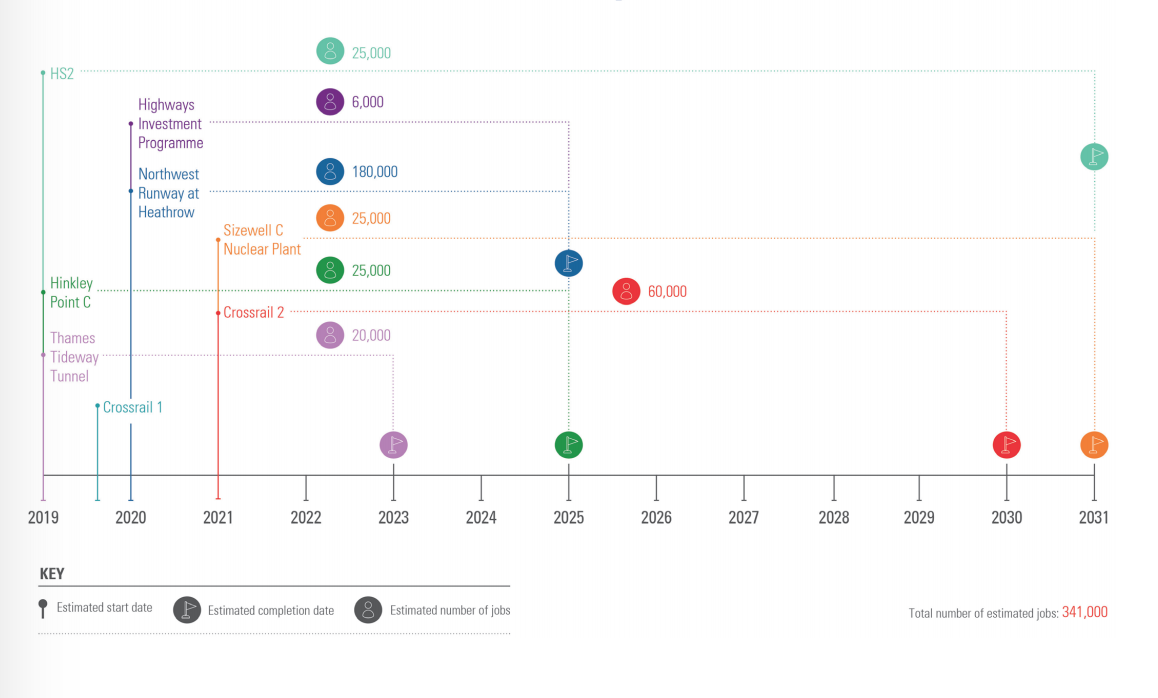 As the Government advances the infrastructure project pipeline Balfour has also urged the Government to use a procurement model that strengthens, rather than weakens the industry.

“We encourage the Government to consider the need for a robust domestic construction industry when contemplating the nature of risks that can be reasonably transferred to the private sector.”

It also wants Government and the industry to help skilled individuals move between schemes, via a single, coordinated passport scheme covering the whole construction and infrastructure industry.

He said: “Government must play its part in making sure that the immigration system is flexible enough to allow the industry to access the skilled workers it needs to build these hugely complex, challenging schemes where there is a shortfall of UK workers – which there will be; that the way in which it procures schemes ensures a robust, viable construction industry; and that the Apprenticeship Levy is fit for purpose and delivering the future talent pool needed.”

Billingsgate, New Spitalfields and Smithfield to get new home together
12 mins ago

Work to start this summer on St Michael's complex in Manchester.
1 day ago

Government promises "biggest change in building safety for a generation."
2 days ago

Oakervee review to give "lukewarm" backing to project
2 days ago