According to the latest Deloitte crane survey the office sector is remaining resilient despite Brexit uncertainty with 3.5m sq ft started over the period, 38% up on the previous survey last autumn.

The biggest sector of the London market, the Square Mile, has started to see a pronounced shift towards large-scale office refurbishment.  Over this period developers began work on eight refurbishments, which will deliver 800,000 sq ft of Grade A space.

The survey also highlighted some concern that the longer term forecast office pipeline of 30m sq ft, is nearly a quarter down over the last two years.

The latest biannual survey recorded 13.2m sq ft of office space now under construction – a 12% increase on the previous survey.

He added that the uptick in construction activity in the run-up to the originally scheduled EU departure date of March 2019 was remarkable, given the magnitude of political and economic uncertainty.

He said that it demonstrated that developers had not delayed their construction plans and had confidence in the London leasing market over the long term.

The City of London continued to dominate construction activity with 6.7m sq ft across 33 schemes representing half of total volume under construction across the capital. 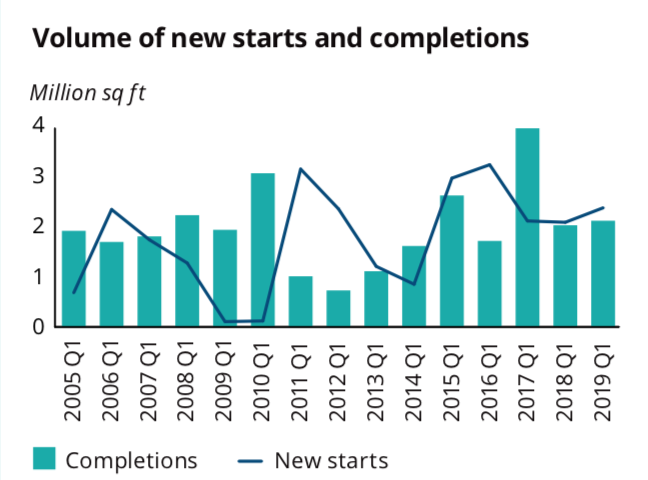 Among the top concerns for landlords and developers, Brexit uncertainty was cited by around a quarter. But longer term issues of ‘lack of development sites’ (32%) and ‘construction costs’ (32%), were the top two challenges for landlords.

Among key package contractors, most firms expected to see a little increase in work over the next 12 months, although the strength of positive sentiment has waned with the exception of external works firms.

The results around price sentiment in the Q1 2019 survey suggest an average 3% rise in prices over the next 12 months – similar to the figure reported in the Q3 2018 survey.

The exception was in demolition where significant price increases are being forecast.

Payment periods are on the increase from main contractors, suggesting harder times ahead.  Payments within 30 days fell from over 40% to less than 30% of the total.

Fixed-fee adjudication service will not see legal bills for contractors rise above £5,000
6 days ago