The 4.25-hectare site will be a new cultural and education centre in East London.

It will be home to major new buildings for the Sadler’s Wells dance theatre, the BBC, the Victoria and Albert Museum and a new campus for the University of London’s College of Fashion.

The mayor’s office also granted planning for around 600 new homes within a complex including a 27-storey landmark tower.

Mace is leading project and construction management of the commercial part of the scheme which is presently in advanced procurement.

The scheme has been designed by a collaborative team of Allies and Morrison, O’Donnell + Tuomey and Camps Felip Arquitectura.

PJ Careys has the £16m contract for substructure work on the site. Select Plant also was awarded a £5.4m contract for hire of six tower cranes on the job.

Speaking on behalf of all the East Bank partners, Lyn Garner, chief executive of the London Legacy Development Corporation, said: “This is a huge milestone for the project and testament to the hard work, and commitment of all those involved.

“East Bank will be the glue that binds together the different elements on the Park from world-class visitor attractions, high-tech business districts, thousands of new homes and wonderful parkland and open spaces.

“Now, with planning permission in place for the biggest and most exciting culture and education project for a generation, we can start to deliver on the promises for jobs, skills and homes for east London.”

The other parts of East Bank are UCL East, a pioneering new campus for UCL in the south of the Park and the V&A’s new Collection and Research Centre will be located at Here East in the north of the park.

Last year, the Mayor confirmed that at least 50 per cent of new homes across the remaining development sites on the Park – Stratford Waterfront, Pudding Mill and Rick Roberts Way – will be genuinely affordable.

Contractors told no new cladding supplies until January
13 hours ago

Building costs to be cut to £1.8bn per plant using proven technology and factory manufacture
20 hours ago

Self-employed trade rates 20% up on a year ago

ISG makes a profit and stays debt free despite Covid 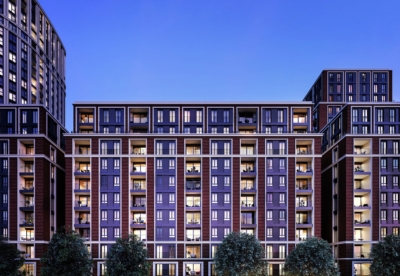 Completions on track for 40% uplift to 6,500 homes as weekly sales rates jump
1 day ago

Project involves 5.5km of new railway between Pill and Portishead
5 days ago

Contractor reveals impact of Covid on finances
5 days ago

TBM will dig 10 miles of tunnel under the Chilterns, operating 24/7 for the next three years
6 days ago