Latest Welsh Government estimates suggest improving an 8km stretch of the road between Gilwern and Brynmawr will cost £321m and now not be completed until next year.

These big cost overruns have tipped Costain and the Welsh Government into a simmering dispute about who is liable to pay certain costs.

A report issued today by the Auditor General for Wales, commissioned as a result of the dispute, shines a light on problems on the project.

Some of the £100m increase relates to design changes requested by the Welsh Government and extra measures to address environmental impacts, but the engineering and contractual challenges experienced on the project account for most of it, concludes the report.

Costain argues that the latest estimates of Welsh Government liabilities are understated, while the authorities argue the figures represent a reasonable allowance for its liabilities at this stage.

It also emerged that Costain refused twice in 2017 to sort issues out using adjudication, with the Welsh Government finally commencing adjudications in 2018 against Costain on three separate issues without its agreement.

Since then, the pair have been involved in separate adjudications and arbitrations on different project issues with varying success.

The project was progressed using early contractor involvement with Costain first signed up in 2011. By December 2014, at the start of the detailed design and construction contract, target costs stood at £223m.

The project involves building on a steep-sided valley – the Clydach Gorge – and passes through the Brecon Beacons National Park. It forms part of a larger scheme to improve 40km of the A465 between Hirwaun and Abergavenny which is now expected to cost around £1bn overall.

The final cost and timescale for Costain’s project remain uncertain. Work was due to finish in September 2018, but full completion is now expected to run to Spring 2021.

Auditor General for Wales, Adrian Crompton said today: “This is not the first time that the Welsh Government has faced difficulties with significant cost increases and delays on road projects and it is vital that lessons are learnt for future infrastructure schemes.

“Despite some wider benefits being delivered and expectations about the eventual impact of the road improvement, those living and working locally are paying a higher than expected price for the ongoing delays and disruption during construction.”

Six sections of the A465 with a range of procurement models 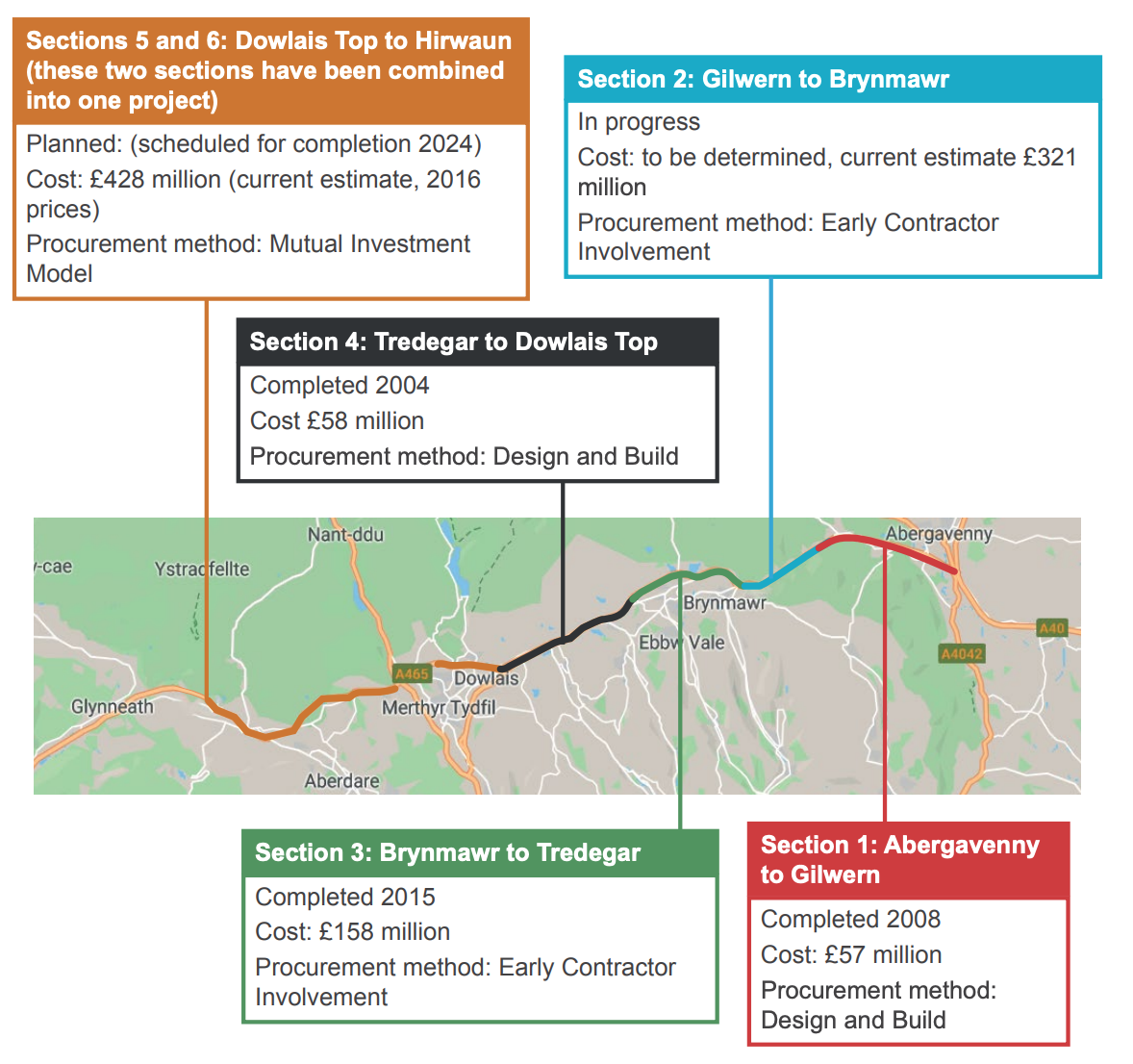 In 2000, the Welsh Government anticipated that all six sections could potentially be completed by 2009, for £268m

In the previous Auditor General’s January 2011 report, the Welsh Government expected the entire A465 scheme to be completed by 2020 for £763m.

But the timetable has slipped and the Welsh Government estimates the scheme will complete in 2025 at a total cost now of around £1bn.

A Welsh Government spokesperson said: “This project is widely recognised as one of the most complex road engineering projects in the UK at the moment, presenting significant construction challenges.

“We recognise the frustration caused by the issues highlighted in the report, and will, of course, consider its findings. Lessons from the project so far have already been incorporated into subsequent projects.

“We remain confident that this ambitious and complex scheme will be completed as intended and will bring significant benefits to the region.”