The framework is divided into two lots for projects of £10m-£30m in value and projects £30m plus.

Six firms have been awarded places on lot 2, estimated to be worth £900m over the next four years, while eight firms share a place on lot 1, expected to account for a £600m spend. 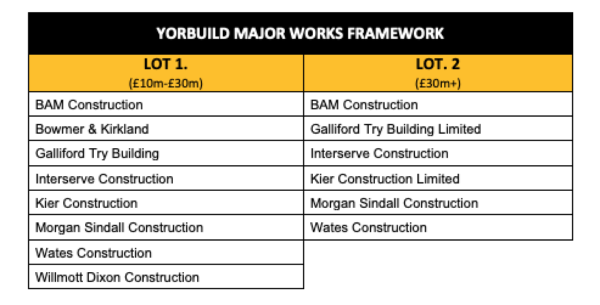 New contractors on the framework lots include Bowmer & Kirkland and Morgan Sindall, while current incumbents ISG, Balfour Beatty and Engie failed to retain their places.

It can be used as a procurement route by any public sector organisation in these areas, and will provide access to a mix of new build and refurbishment works.

The four year framework runs until April 2024, with an option to extend for a further two years.

YORbuild has historically been the primary procurement vehicle for many regional local authorities including Leeds City Council and East Riding of Yorkshire Council.

The framework has also been used by the Department for Education, NHS trusts, universities, colleges and bluelight authorities to procure projects.