The structure, which weighs more than the Eiffel Tower, is being installed in a nine-day operation as part of the £1.2bn upgrade of the East Coast Main Line.

Main contractor Morgan Sindall has spent the last nine months building the new tunnel by the side of the East Coast Main Line at Werrington.

Now the massive concrete construction is ready to be pushed into place along pre-installed guiding supports, after the three tracks above have been temporarily removed.

Using a traditional method of installing a tunnel on the crucial stretch of the line would have meant closing it completely for about a month.

But the pre-constructed structure will be installed in just nine days – and means a reduced level of service will be able to operate at the same time.

Paul Rutter, Route Director for Network Rail’s East Coast Route, said: “In the past, Network Rail might have approached this problem by thinking about the easiest way to do the engineering.

“Instead, I’m proud to say we have come up with a creative and innovative solution that will deliver massive benefits while keeping disruption to a minimum.”

The work is being carried out at Werrington, north of Peterborough, where the East Coast Main Line is crossed by a slow-moving east-west freight route.

Installing the tunnel will take slower freight trains off the fast route, speeding up services and improving reliability, while also reducing the amount of maintenance required on that section of track. 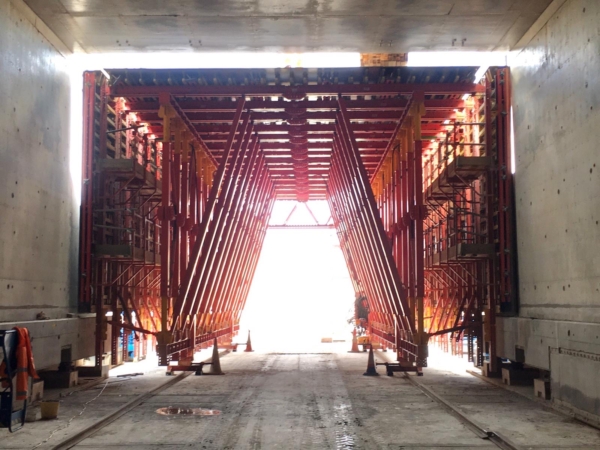 Inside the concrete structure at Werrington

The new tunnel is a 155-metre curved concrete box that will be painstakingly pushed at 150cm per hour, using massive jacks to propel and steer it into place.

It will be the first time this construction technique has been used in this way in the UK.