It is the first time the shed and multi-room building contractor has led the ranking for the highest tally of contract wins in the rolling 12-month league.

The Northampton firm has benefitted from soaring investment in logistics warehouses and factories with a welter of major projects taking its estimated order haul to over £1.5bn, according to data collected by information specialist Barbour ABI.

It also benefitted from student and build to rent projects as well as its civils division delivering warehouse groundworks as well as now moving on to its own standalone major housing enabling works awards. 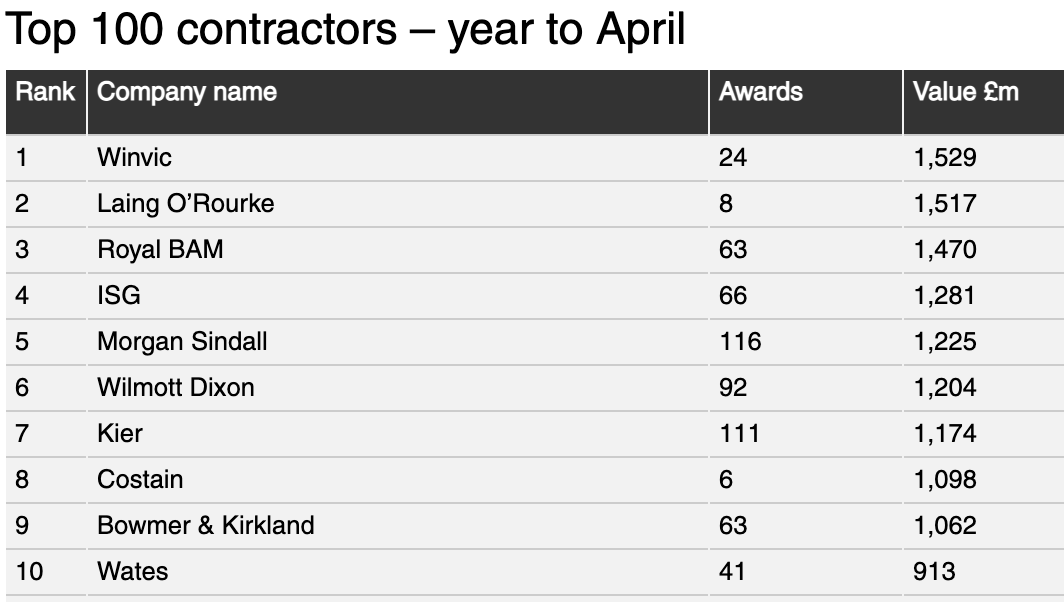 Laing O’Rourke ranks second place close on the firm’s heels followed by BAM and ISG in third and four places, each helped  by major projects wins for the Manchester arena and Northumberland’s battery gigaplant, respectively.

In the monthly league for wins booked in April, Laing O’Rourke came top on the strength of signing a deal to advance the £1.3bn redevelopment of London’s Olympia Exhibition Centre.

Signing of the deal has still to be officially confirmed after the start to the mega-project was delayed by Covid.

Work will include revamping the existing exhibition halls and adding 51,000m² of office, studio and co-working space across its site.

Several big civils project wins were also confirmed in April. Skanska signed a £507m contract to improve the A428 road in the East of England and Bam Nuttall agreed a £320m deal to deliver the main works package on the A27 Arundel bypass, in partnership with Mace and Aecom in its Linkconnex consortium.

Costain also booked the £307m improvements to the A1 around Gateshead after it received development consent.

This new service will allow you to generate custom made tables that can rank contractors by type of work secured and over different time periods.

Here’s how to create your own league tables:

Simply click the Select Your Criteria bar to choose whether to generate a client or contractor league table. Then decide whether to select for all work secured or specific sectors. Now click the Hide Item bars above your selections and your customised league will be revealed.

You are then able to fine-tune the rankings further by selecting time frames of one month, three months or 12 months. You can also generate a Top 10, 50 or 100 rankings.

And, of course, like the rest of our data page it’s all completely free for readers.