The 51-year-old from Kirkby, who is not being named to protect the identity of his son, has been prosecuted following the incident in Kirkby on 20 February 2013.

He was ordered to carry out 80 hours of community service in the next 12 months, and to pay prosecution costs of £200.

Liverpool Magistrates’ Court heard the man had taken his son to work with him during the spring half term holiday and had allowed him to climb the scaffolding while he fitted barge boards to the edge of the pitched roof.

His son was seen shimmying along a narrow plank on the scaffolding, gripping to the frame to prevent him falling, as he made his way towards the top of a ladder where his dad was waiting for him.

The ladder was not tall enough to reach the lowest working platform on the scaffolding.

The builder therefore had to hold his son’s ankles and place his feet onto the rungs of the ladder to make sure he did not fall or miss his footing.

He was spotted by a passing HSE inspector who issued an immediate Prohibition Notice ordering the builder to dismantle the scaffolding as it was unsafe to use.

The court was told the scaffolding and ladder were not secure, there were missing hand rails to prevent people falling, and no boards had been fitted around the edge of the scaffolding to stop tools or materials falling to the ground below.

The elderly home owner and visitors to the property were put at risk of being struck by falling objects as a result.

Speaking after the hearing, HSE Inspector Matt Greenly said: “We understand it can be difficult to find things to keep children occupied during the school holidays but taking them into potentially dangerous workplaces isn’t the answer.

“The ten-year-old boy could easily have been seriously injured or even killed if he had slipped and fallen from the scaffolding but he trusted that his dad knew what he was doing.

“The incident would have been bad enough if the scaffolding had been erected safely but it was not and, as a result, the builder put his own life at risk as well as his son’s.

“Building sites have the potential to be dangerous places if the proper health and safety procedures aren’t followed, with dozens of deaths reported in the industry every year. They’re certainly no place for a ten-year-old boy.” 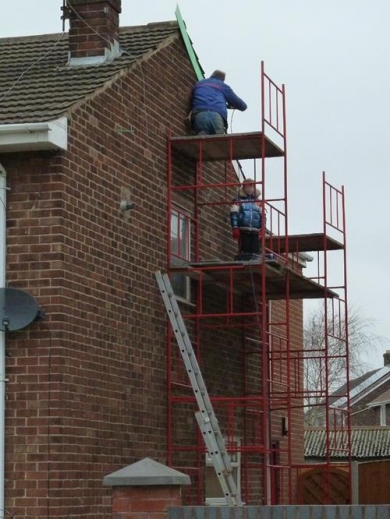