The latest Markit/CIPS UK Construction Purchasing Managers’ Index recorded its seventh monthly rise on the trot last month, raising spirits about prospects for the year ahead.

The index jumped to a six-year high of 62.6 in November from 59.4 in October – where any figure above 50 signals growth.

Construction buyers pointed to a steep and accelerated expansion of house building activity in November, with the rate of growth the fastest for 10 years.

Work on commercial construction projects also increased sharply during the latest survey period, and the rate of expansion was the steepest since September 2007. Civil engineering activity increased at a robust pace that was little-changed from that recorded in October.

David Noble, Chief Executive Officer at the Chartered Institute of Purchasing & Supply, said: “House building lived up to its new-found status as star performer in November with the steepest growth rates in 10 years, with commercial and civil engineering activity holding their ground too.

“Inevitably, business confidence continued to rise sharply, helping to boost spending across the industry heading into the festive season.

“This in turn contributed to a significant increase in workforce numbers, pointing to continued optimism and rising expectations for the future.

He cautioned: “As seen in previous months, suppliers are struggling to keep up with the sharp surge in demand; stocks are being squeezed and delivery times continue to lengthen. Along with increasing cost burdens, there are worries that this will have an impact on output.

“Despite this construction firms are confident this won’t hold them back in the New Year.”

Tim Moore, Senior Economist at Markit and author of the Markit/CIPS Construction PMI, said: “Construction growth is still coming from a low base as output levels rebound from a deep and protracted double-dip recession that only really ended this summer.

“Therefore, while construction’s current growth trajectory may be the steepest for over six years, there is still a huge loss of output to recoup before the sector reaches its pre-recession peak.

“Looking ahead, there are a number of positive signs that improvements in activity levels will be maintained, as job creation picked up again in November and confidence about the business outlook reached its highest level since September 2009.” 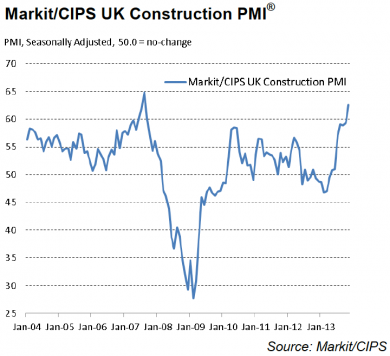