The 150,000 sq ft project is a major coup for the firm, which heard yesterday that work can now start early next month after a funding deal between the BBC, Legal & General and local developer Rightacres.

In another major contract win ISG this morning separately announced it had secured its third data centre project this year in Europe worth around £141m.

The BBC project next to Cardiff’s Millennium stadium is the first phase of a £400m investment by L&G in the 12-acre Cardiff city centre regeneration scheme designed by Foster + Partners. 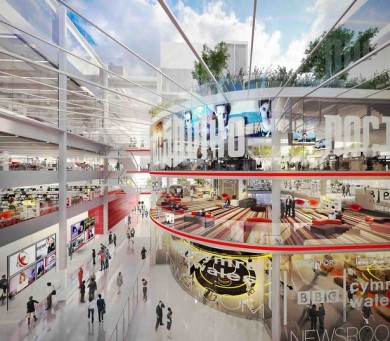 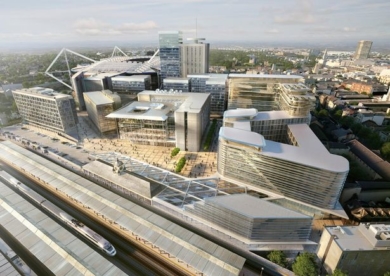 How the finished Central Square regeneration scheme will look

The Cardiff deal includes the acquisition by LGC of One Central Square, a 135,000 sq ft office being built by Willmott Dixon, which is due to reach practical completion in February 2016.

It also comprises the forward funding of Two Central Square – a 120,000 sq ft building which will be built in parallel with the BBC.  Both office buildings are experiencing strong occupier interest.

Paul McCarthy, Chief Executive of Rightacres, said: “Having Legal & General as our partner has rapidly accelerated the development of Central Square. They understand Cardiff and support its ambition to become one of Europe’s most liveable cities.  The regeneration of Central Square will hopefully play a key role in helping Cardiff achieve its ambitions.”

Tom Roberts, senior transactions manager at Legal & General Property, added:  “This is a significant milestone in the scheme’s exciting evolution and reflects the growing momentum that is gathering.  With strong occupier interest in the other buildings, we feel confident that we will be able to deliver this major urban regeneration scheme ahead of the timescales previously envisaged and act as a major positive boost to the city.”

Almost 1,200 staff will relocate from BBC Wales’ current site in Llandaff to central square in 2019.