Around 15 workers were involved in the walkout, which disrupted the huge site, claiming they had not received a promised pay rise.

The men are understood to work for subcontractor CLR Plant Hire, which is part of the Dunne Group, and were helping concrete pours on cores and superstructure.

According to a report in the Daily Record newspaper a site source said: “There is around £20,000 worth of cement that will have been wasted in one day and when you add up all the other knock-on costs, I’d say the company will have lost around £50,000 in a day.”

A spokesman for main contractor Brookfield said: “Dunne Group are working with the union to resolve the matter and are confident this can be done quickly.

“Work is continuing on the site.” 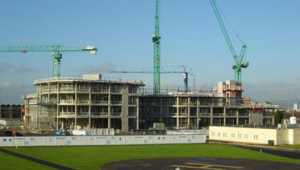